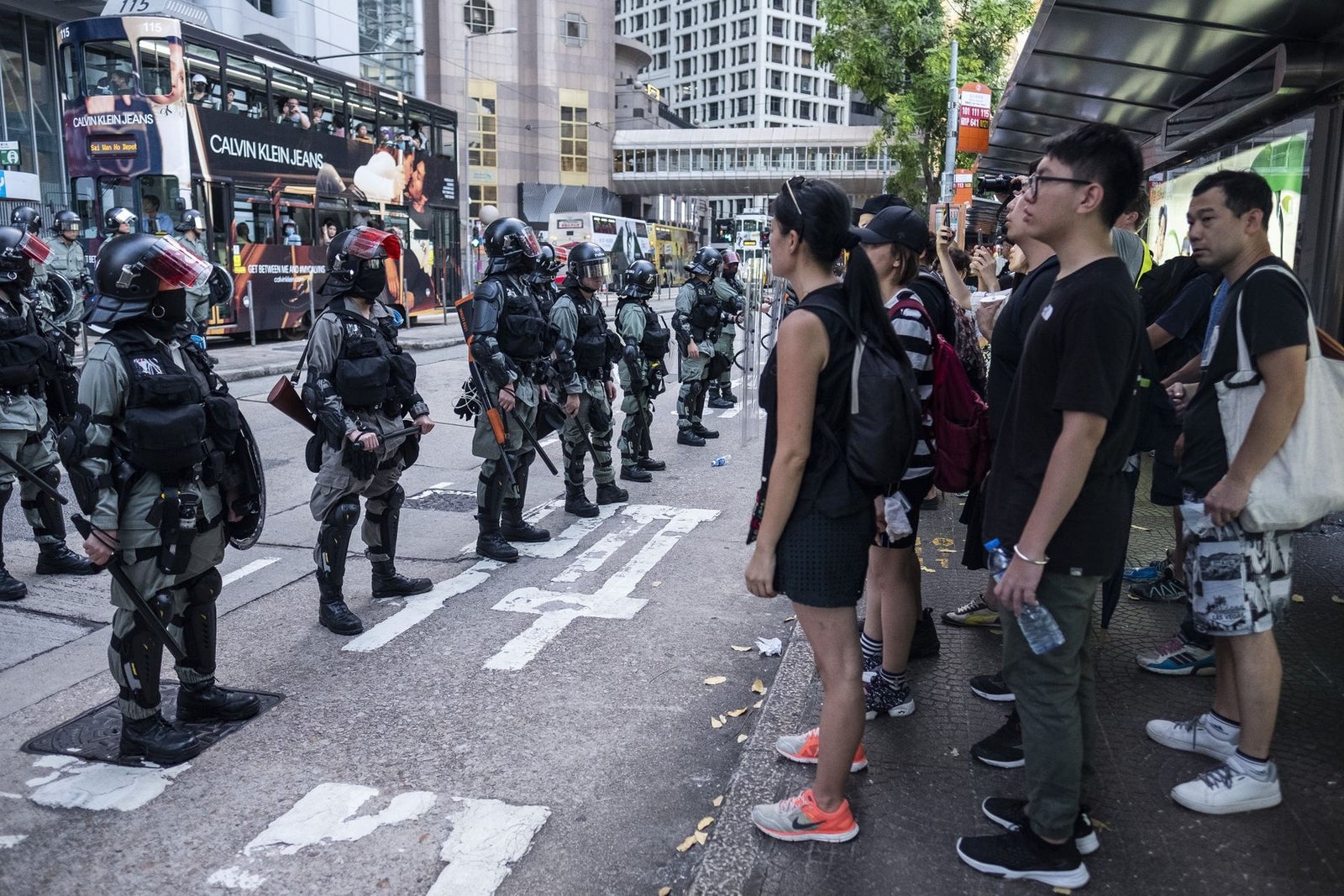 Riot police stand guard in front of a bus station in Central on Oct. 5. Photographer: Justin Chin/Bloomberg
As a Vancouver born, Cantonese Canadian, with family members still living in Hong Kong, the relevance of whether Hong Kong citizens will choose Vancouver, Canada as their top choice for immigration in the throes of escalating violence bears relevance beyond business as a Vancouver Realtor.

As protests in Hong Kong intensified this summer, Los Angeles lawyer Bernard Wolfsdorf anticipated “a new wave of immigration” to the U.S. So he traveled to China and met with regional immigration advisers.

They told him not to get excited.

“What I heard is, while many are leaving Hong Kong, the U.S. isn’t the No. 1 destination,” Wolfsdorf said. “The U.S. is simply not seen as the most desirable option presently.”

When things go sideways around the globe, the U.S. has traditionally served as an island of safety and security, particularly for the world’s wealthy. The U.S. is already home to more Hong Kongers than any country outside of mainland China, and recent data suggests more are looking to leave. Applications for a key emigration document, the “good citizenship card,” are up 54% in the past year, according to official data.

But anti-immigrant political rhetoric, high-profile incidences of gun violence and impending changes to the “investor visa” program have encouraged Hong Kong’s would-be emigres to consider alternatives such as Australia, Canada, Singapore, and Taiwan.

The street demonstrations, which raise fundamental questions about the future of Hong Kong, escalated this month. Two teenagers were shot as protesters fought with police, and the government used an emergency law for the first time in more than half a century to ban face masks.
Even before the protest movement began, the U.S. was losing luster. In a December survey by Chinese University of Hong Kong, one-third of the city’s citizens said they’d consider leaving. Among them, the most popular destinations were Canada and Australia, with at least 18% of respondents each, followed by Taiwan, at 11%, and Singapore at 5%. The U.S. was the top choice for 2.9%.

Australia is a favorite for clients of John Hu, founder and principal consultant at John Hu Migration Consulting in Hong Kong. Advantages include a small time difference with China and mild climate. Canada is also popular, Hu said, especially for clients who want to follow family members who previously emigrated there.

Canada last year recorded its biggest influx of immigrants since 1913. Under Prime Minister Justin Trudeau, the country has aggressively wooed immigrants. Its Global Skills Strategy program, for example, offering temporary work permits to applicants in as little as two weeks, has lured about 40,000 workers and their family members over the past two years.

Family ties make the U.S. attractive. So does the EB-5 investor visa program, which offers residency to anyone able and willing to make a $500,000 investment in a business or other project that creates jobs. Applications from Hong Kong citizens are processed separately from investors from the mainland, which means that once an application is considered, it can often be approved with little if any wait.

The price of those visas is about to surge, however. Starting on Nov. 21, the minimum investment rises to $900,000, part of a reform of the EB-5 program.

Even for those currently in the queue, a bureaucratic backlog means it can take years to get a visa. The U.S. Department of Homeland Security has slowed its handling of paperwork to a crawl, making applicants wait years for an answer to their petitions. The department was buried in 930,311 pending cases of all types at the end of June, government data show, double the number of pending cases from 2015.

The estimated wait for processing investor visas is at least 28.5 months, according to the U.S. Citizenship and Immigration Service. “EB-5 is not likely an answer to people in Hong Kong who say they need a quick exit strategy,” said H. Ronald Klasko of Klasko Immigration Law Partners in Philadelphia. “It will probably be at least three years before that’s going to get them to the U.S.”

People who don’t want to wait often find other ways to enter and stay in the U.S., including student and visitor visas. “During these troubles, my clients have been in the U.S. and Canada visiting,” said Carolyn Lee, an immigration attorney based in Ithaca, N.Y.

A less formal immigration status can also overcome another barrier daunting wealthy people who want to move to America: its unique and costly tax rules. For example, new immigrants must disclose all foreign holdings to the Internal Revenue Service, a level of scrutiny that many aren’t prepared for.

“Many of my Hong Kong-based clients are considering alternatives” to the U.S., said K. Eli Akhavan, a partner at CKR Law in New York. “The tax bite can be quite heavy.”

Hu, the immigration consultant, said American tax rules often take a backseat to quality-of-life issues for families considering the U.S. “Hong Kong media’s frequent coverage of school shootings in the U.S. has also made people worry about safety,” he said. Another concern for some, he added, is that “racial discrimination is relatively serious in certain areas.”
Still, the U.S. remains a popular place to do business, educate children, and park money. And even in the most stable times, the global super rich often see spreading assets around the world as an important way to protect their fortunes, said Kathryn von Matthiessen, partner at Katten Muchin Rosenman LLP in New York.

“Most families I work with are looking to create dynastic wealth,” she said. “That means they have to manage political volatility and geographic volatility.”